Formerly agricultural and grazing land, Upton Court Park was used between the 1940’s and 1970’s as a site for tipping waste and suffered accordingly with high levels of contamination.
This exciting project sought to reverse this environmental decline by creating this new woodland and creating an oasis for wildlife in an urban location. A total of 8,585 native trees were planted on the site.
Upton Court Park Wood was created with multiple objectives of conservation and landscape enhancement, public access and carbon sequestration.  The project also formed part of the Jubilee Woods Project, designed to pay tribute to the Queen’s 60 year reign by planting millions of native trees across the United Kingdom, forming a living legacy for future generations.

Slough Borough Council in this case are both the landowner and the user of the carbon.  They do not plan to sell any Woodland Carbon Units, but use units generated in the organisation’s own corporate Greenhouse Gas accounting.  This is a good example of how an organisation can use its assets to generate carbon units and to compensate for their own emissions.

All councils, including Slough Borough Council, have to report their emissions annually following government guidance.  One thing they can do to help compensate for their emissions is to buy or create Woodland Carbon Units within Woodland Carbon Code projects.  One of the reasons for Slough Borough Council creating this woodland was to be able to use the Units generated as the trees grow in this manner, improving the council’s net GHG budget.

Verco helped develop the project on behalf of Slough Borough Council.  The Woodland Trust also acted as an advisor.

Trees were planted at varied spacing to achieve at least 1600 established trees per hectare. The varied spacing was designed to create a more natural woodland structure to mimic natural colonisation. Trees were planted in wavy lines to prevent rows being visible while being easily maintained.   Woody shrub species were planted on the outer edges of the wood to give a softer, more graduated edge to the wood. These shrub species were also scattered throughout the woodland block in order to create a sparse, scrubby understory, very valuable for wildlife.

A wildflower meadow and paths were also created as part of the project design. At the centre of the wood a diamond of 60 Oak trees were planted to commemorate the Queen’s jubilee.  Once established the area will be thinned gradually to create a more natural woodland with randomly spaced trees.

"This exciting project has enabled us to create an entirely new area of woodland using native species, with huge benefits for the environment and residents” 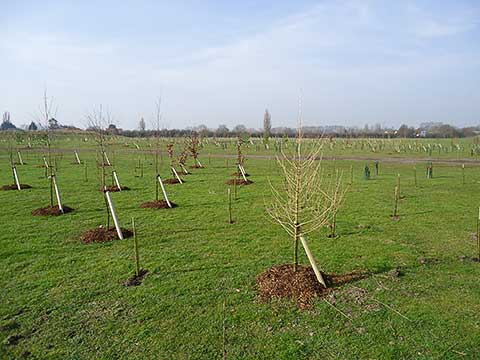 The longer term management intention is to manage Upton Court Park Wood for amenity purposes, thinning to create a natural looking woodland that will be a pleasure for people to visit. The area is managed to allow unrestricted public access, improving opportunities for physical activity and improving the health and wellbeing of users. It will also significantly improve the landscape from the M4 as well as for users of other areas of Upton Court Park.

The project also restores former landfill areas that otherwise would have harboured higher levels of pollutants, and once the trees are established will help to remove air pollution from the nearby M4 motorway as well as providing a sound barrier between the M4 and nearby houses, as well as the Park itself.

The project has also hosted a Tree planting event for local schoolchildren, giving them the opportunity to plant trees and learn about woods and trees from experts whilst having a fun day out.