Minnowburn is a National Trust site set in beautiful countryside outside of Belfast. Minnowburn Wood was created with multiple objectives of conservation and landscape enhancement, public access and carbon sequestration. Just 3.5 miles from Belfast City Centre, the woodland is located in the heart of Lagan Valley Regional Park. It sits adjacent and forms an important link to the Giant’s Ring, an enormous Neolithic earthwork henge, thought to be at least 4,000 years old.

This exciting project sought to expand woodland cover, adding to existing woodland in Northern Ireland (which currently has one of the lowest woodland cover rates in Europe) by creating this new woodland and creating an oasis for wildlife in an urban location. 19,500 trees were planted on the site with nearly all being native species. 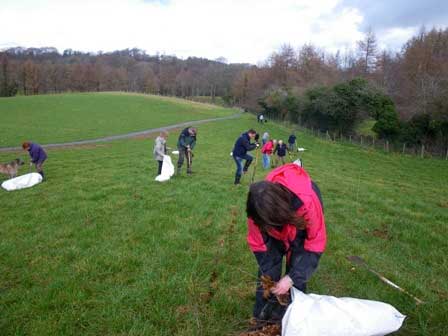 The Minnowburn site is a unique site in UK forestry. This is the first and so far only validated Woodland Carbon Code project in Northern Ireland, an area with some of the lowest amounts of woodland cover in Europe.

A significant proportion of the woodland was planted by local people working together in volunteer groups, strengthening local communities. It has also created new woodland in a peri-urban situation, enabling access for an urban population to enjoy woodland that they would not otherwise have easy access to. Woodland paths link up with existing paths in the wider area, expanding recreational access for local people e.g. the new path created has linked with an existing path to create access to a local Neolithic henge thought to be at least 4,000 years old.

It is this combination of woodland creation, carbon sequestration and high social benefit that makes Minnowburn a particularly special project in UK forestry.

Forest Carbon purchased carbon from the landowner, to sell on to businesses looking to compensate for their emissions at a later date.

One of the key aims of the project is to create woodland within an area that has for a long time lacked significant woodland cover.

There was mature existing woodland within the Minnowburn area; however it needed to be joined up to increase the size of the overall woodland cover and also to improve access around the area. Access on actively farmed land with grazing stock and ploughing can be considerably more difficult to manage than through woodland and conversion to woodland significantly enhances the biodiversity value of the site.

Also the surrounding existing woodland was predominately Beech and it was felt that a greater diversity of tree species would be beneficial to a wider range of wildlife. It will also sequester carbon to mitigate climate change, removing harmful greenhouse gases from the atmosphere. It is predicted that that 2,928 tonnes of atmospheric CO2e will be removed helping to combat climate change; 2,401 tCO2e can be sold and 527 tCO2e will contribute to the WCC buffer.

Craig Somerville, National Trust Belfast Lead Ranger and Project Manager, said: “We were very keen to register the Minnowburn woods as part of the Woodland Carbon Code. We all need to reduce our impact on harmful greenhouse gas emissions and planting trees is great way to do this. Not only have we helped the environment and improved the landscape, we’ve also created a woodland that will be used and enjoyed by visitors in lots of different ways, for play, for learning new skills and for just walking and admiring the trees and wildlife.

The Woodland Carbon Code delivers standards of best practice for woodland creation in the UK so that potential carbon buyers who want to invest in accredited woodland projects can be assured that the woodland will be managed in a caring and sustainable way for the long term. The WCC also offers a much appreciated source of extra income that will greatly assist with the management of this vital urban fringe green space”

The project has been developed with the National Trust, Forest Carbon and the Northern Ireland Forest Service.

Local community and volunteer groups took part in planting around 2 ha of the woodland in 2011; the rest was completed by contractors. Due to the fairly large scale of the planting site, planting in straight lines at 2m spacing was chosen. No tree shelters were used due to a fairly low rabbit population in the local area and therefore a minimal risk of damage.

The woodland was planted on two agricultural fields and almost one kilometre of all-weather aggregate walking paths were put into both to develop public access. To date no interpretation has been added, but way-marking posts will be installed as part of a wider interpretation project at Minnowburn.

Local volunteers will be involved in the future management of the woodland which will involve thinning, extraction, brashing and path maintenance. It is intended that harvested timber from the woodlands will be removed using horse logging and small ATV vehicles.  The woodland will receive light thinning on a frequent basis, supplying firewood for the on-site National Trust Ranger Base and will also supply firewood to local market. Harvested timber will also be supplied to a local green woodworker who will also run courses at the site. 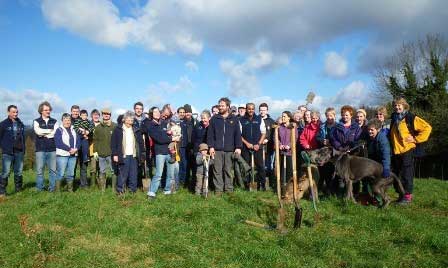 The longer term management intention is to manage Minnowburn Wood for social forestry purposes, thinning to create a natural looking woodland that will be a pleasure for people to use.  The entire project woodland area is managed to allow unrestricted public access, improving opportunities for physical activity, learning and improving the health and wellbeing of users. This high value social woodland close to the city of Belfast will be used for activities and events such as a forest school, bush craft courses and the installation of natural play apparatus that will encourage more families and other visitors to visit and get as much enjoyment as possible out of the woodland.

The new woodland paths link with high usage paths along the River Lagan and have been instrumental in creating a popular loop path to the Giant’s Ring, a huge Neolithic henge, encouraging people to view and value this part of local heritage.

The paths are already popular with walking groups and everyday walkers and runners. The National Trust conduct nature and heritage walks at Minnowburn and some of these take visitors through the new woodlands. For example a guided walk held in May every year called the ‘Minnowburn Dander’ which looks at conservation projects at Minnowburn. During this walk people visit the woodland to look at the benefits that it is bringing for biodiversity. 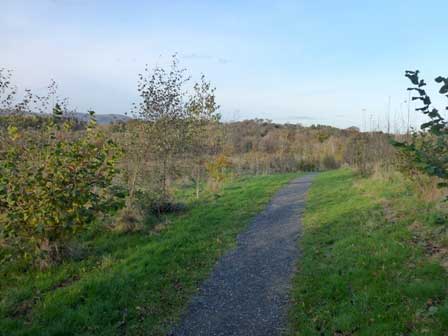