Craigengillan Estate changed hands in early 2000 and the new owner, Mark Gibson, embarked on a tremendous restoration programme, a policy of encouraging public access and huge works to protect and enhance the landscape and the nature conservation interest of the estate.

Craigengillan’s motto is ‘Where Natures Magic Grows’.  The historic and very beautiful 1,214 hectare (3,000 acre) Craigengillan Estate is situated in a Highland landscape, 15 miles from the Atlantic, on the edge of the former coal-mining village of Dalmellington.

The River Doon flows for 2.5 miles through the Estate and there are lochs, wetlands and two large Sites of Special Scientific Interest (SSSI).  Conservation is an important management objective and the diverse and pristine natural habitats support a marvellous diversity of wildlife.  The sheep farm enterprise is registered as organic.  Historic Scotland has recognised the quality of the landscape by including it within its ‘Inventory of Gardens and Designed Landscapes’.  This Inventory defines areas that are nationally important and valuable.  The Estate also carefully manages and has restocked, where necessary, 202 hectares (500 acres) of older mixed woodland.

The aims of the management of the woods are to ensure the healthy existence of the woodland into perpetuity, with the following objectives: 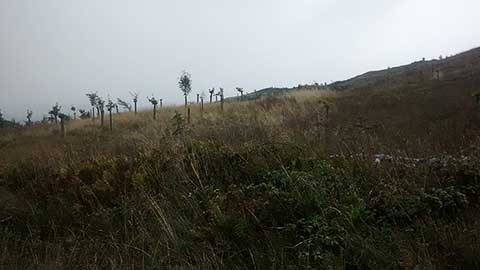 The carbon from this project is still available for sale, as the owner plans to sell the carbon as it is sequestered.

The Craigengillan Estate project is a particularly interesting one. Situated within the UNESCO Galloway & Southern Ayrshire Biosphere and within one of only nine ‘gold tier’ Dark Sky Parks in the world, our aim is to make Craigengillan a living model of environmental excellence and a demonstration of the fundamental key ethos of UNESCO Biospheres; the mutual benefit to man and the natural world that comes from us caring for nature and natural landscapes – the sure foundation for sustainable development.

For purchasers of carbon units at Craigengillan, there will be great opportunities for participation and involvement in woodland, conservation and community projects here and at The Scottish Dark Sky Observatory.

Craigengillan estate has also won a number of awards for its work at Craigengillan, including: 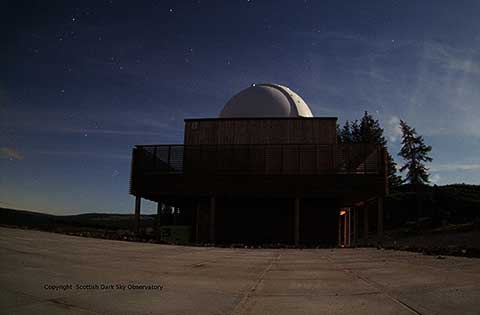 “As the vision at Craigengillan unfolds, there will be new projects for which funding will be needed.  The latest has been The Scottish Dark Sky Observatory, while others planned for the future include a Field Centre, Outdoor Activity Centre and Nocturnal Zoo.  They form part of our overall aim of becoming a working demonstration of environmental excellence within the UNESCO Biosphere and the Dark Sky Park".

"The sale of carbon units in the future may generate funds for both existing and future projects.  We hope that buyers of carbon units will wish to become involved hands-on with other conservation projects at Craigengillan".

"In planning the new native woodlands, we have tried to secure as many positive outcomes as possible.  There will be continued encouragement of public access, projects with local schools and use of Craigengillan as a venue by all sorts of organisations.  Such visitors will recognise the importance of forest carbon sequestration much more readily if they can have it discussed while they are actually looking at growing trees".

"By becoming involved in the Woodland Carbon Code, it has focussed our minds on the subject and added to our determination to see young woods mature and thrive, delivering everything we hoped they would.  They will work for nature, for people and for the planet".

A huge amount of thought and planning to make the new woodlands contribute not just to carbon sequestration, but also to landscape, biodiversity, integration with the organic farming enterprise, education and public access. Craigengillan estate thought hard about what local markets could be in thirty to forty years for the different types of timber we could produce.

Before determining the locations of each area of new woodland, Mark Gibson carried out a comprehensive soil testing survey. This gave the sound data to choose the correct species to plant that would flourish within Craigengillan estate. Native species were used throughout the scheme and will lie in perpetuity on the estate.

The first group project contains four new woodlands planted between January 2004 and spring 2006, varying in size between 1.5ha and 58ha and created a total of 90.8ha of new woodland. The second group project planted a further 120.15ha in spring 2015. On completion, the estate will have created 211ha (521.4 acres) of new native woodland within WCC projects carefully planned for timber production, amenity, wildlife, soils and enhancement of the landscape.

From both our WCC groups, Craigengillan estate has certified almost 82,000 tCO2e which will be sequestered over the next 100 years; 65,513 tCO2e which is available for sale and 16,481 tCO2e which will contribute to the buffer. For purchasers of carbon units there would be great opportunities for participation and involvement in woodland, conservation and community projects.

The Forestry Commission also provided grant funding for the scheme.

In an area which bears the scars of its industrial heritage, both in the landscape and socially, the work at Craigengillan has provided a sense of hope amongst the local community, and the landscape and environment is being transformed into a model of man and nature working to each other’s benefit.

The Estate works very closely with the local community and in particular with the secondary school and the four primary schools which feed it.  The Estate owner Mark Gibson has spent time in schools educating local children about the high quality resource at Craigengillan.  In doing so he has created a first class community woodland.  The estate also works with Scouts, Cadets, Duke of Edinburgh and John Muir Trust award candidates providing a natural capital resource for young people to use to develop and gain knowledge of the outdoors.

There is full and free public access to the Estate, with a network of some seventeen miles of footpaths, for informal recreation.

The planted woods also include one of the sixty Diamond Woods created for the Queen’s 60th Jubilee.  The 2015 woods are also to be part of the Woodland Trust’s project to commemorate the centenary of the First World War. These woodlands will honour all those involved in the war by creating large areas of commemorative woodland that will stand as a tribute for centuries to come. 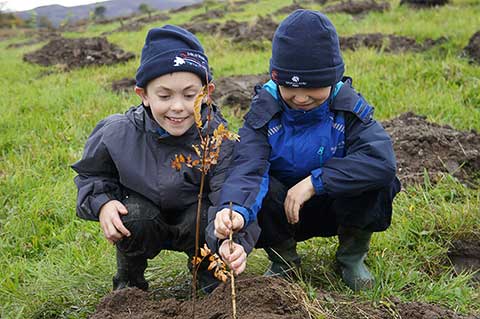